Share a memory
Obituary & Services
Tribute Wall
Read more about the life story of Vera and share your memory.

Vera Dahl Hoefer, age 98, passed away on January 21, 2023 at Pioneer Manor in Hay Springs, Nebraska. Vera was born at the family farm 15 miles south of Hay Springs on September 4, 1924. She was the fourth child born in Jens and Sophie (Jensen) Dahl.

Vera went to school at the country school “Busy Bee”, District 93. She and her siblings walked to school 1.5 miles each day.

Vera was baptized and confirmed in the St. Peters Lutheran Church on Mirage Flats, then later transferred membership to the United Methodist Church in Hay Springs. When she started high school in Hay Springs she stayed with her Aunt Ikey Stiehl and family during the week; then went home on weekends. She graduated in May of 1942.

Early in life Vera worked at Ogdon, Utah for a year, at the Hillfield Airfield, then went to Junction City, Oregon and worked at a bank for one year.

Vera married her high school sweetheart, Freeman Jean Hoefer on August 3, 1944 in Hay Springs, NE. They moved to San Diego where Jean was stationed at a Naval Base. During this time Vera worked as one of the original “Rosie the Riveters”! She worked for Consolidated Valtee, where she worked on the bottom nose of the PB4Y2 naval plane.

In 1946 they returned to Hay Springs and lived on the Hoefer farm for 16 years. During those early years Vera lost a baby girl and boy to premature birth. In 1947 their son Dennis was born to complete their family.

In 1961 they moved into town and were both employed at the Northwestern State Bank for 20 years. Every year when their vacation was due they would travel somewhere in their camper. They loved camping and through the years they visited all 50 states. Also Denmark, England, Scotland, a Caribbean Cruise, and Panama Cruise. Jean and Vera Enjoyed a long fulfilling marriage of 72 years.

Vera had many hobbies. She dearly loved to bowl, play bridge and cards with friends, knitting, sewing, and crocheting. One of the Specialties she was known for was her fabulous baking, especially her pies! In fact, if you mentioned “The Pie Lady” everyone knew it was Vera.

After retiring, Vera could be found at the Senior Center each Wednesday at 3:00 AM making 12 to 15 dozen doughnuts to sell. Once a month she also went to Pioneer Manor to make donuts for the residents there. She was known there as the “Donut Lady”!

To send flowers to the family or plant a tree in memory of Vera Hoefer, please visit our floral store. 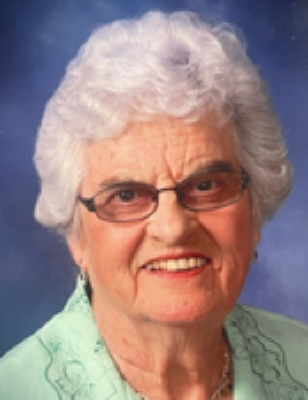